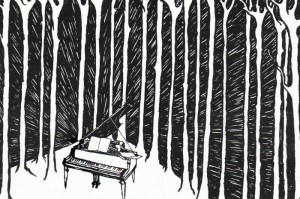 Plays are bad for your health. After watching Polly Stenham’s No Quarter, I wanted a fag. And some booze. And to party. Because this is the effect Stenham’s plays have on me: among the crushed mythologies and family secrets and distorted mirrors, I feel all tingly and alive and seduced.

No Quarter is the story of a family. Or all families. And the lies that hold them together. Stenham doesn’t stray far from previous obsessions: mothers and sons, trashing a house, hanging from chandeliers. Her characters start recognisable, almost predictable, but all of them have wild cards up their sleeve. What they know about each other, or themselves, shifts like quick sand. The play’s brilliance is to tease the magic mirror and reveal it as real life. Stenham’s dialogue is stubbornly down to earth, yet fearless and the combination left me stunned and kind of breathless.

Robin, as played by Tom Sturridge, is a man-boy wrapped in a mystery wrapped in an elf (a Lord of the Rings’ elf, not Father Christmas’ helper). It’s a wild ride of a role, someone who is all things to all people while useless to himself. Sturridge does a fine job of holding onto the character and its slippery, yet seductive qualities. Patrick Kennedy as his brother communicates a touching earnestness (even when deceit is the only possible explanation) and Maureen Beattie as their mother masterfully holds them under her spell, even as she loses everything else.

The rest of the cast is in equally fine form. Special mention for Taron Egerton, as Tommy, who holds a world of sanity in the tiniest gestures and Alexa Davies, as Coby, who gets the best lines and makes the most of them.

Jeremy Herrin’s direction relishes the conjurer’s act. The scene changes have the seduction of a magic trick. Characters appear in the shadows, if not in a puff of smoke, definitely in the afterglow of fireworks. Sound and light chase each other in a set, shabby and old and full of secrets, that envelops the audience. This is where Jerusalem’s Johnny Byron would live if he lived in a big house.

So getting back to the beginning: I still want to party. Who is joining me?

One response to “Review: No Quarter by Polly Stenham, at the Royal Court Theatre”