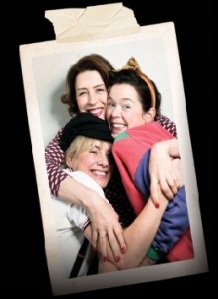 Some plays are like old friends. They don’t try to dazzle you, or overwhelm you. They get under your skin tenderly and quietly. They tease memories and melodies. Amelia Bullmore’s Di and Viv and Rose, as directed by Anna Mackmin for the Hampstead theatre, is such a play.

Which is not to say it is quiet or timid. The story starts with three young women experiencing university life for the first time. And no teenage girl has ever been quiet. The production is full of noise and music and late night energy. It talks about the truths – true loves, true laughter, true fights – we discover when we let our guard down.

The play impresses with its simplicity. Three women meet, become friends, laugh a lot, spend the next twenty years shaping each other’s lives. And then you realise the play is a rarity: while the characters reminded me of women I know, they didn’t remind me of any other play. Women on stage rarely exist without men. Between this and the female Julius Caesar at the Donmar, are we likely to see more plays with all female casts? I hope so.

The dialogue is sharp, not with the cockiness of a punchline, but with the elegance of overheard conversations. The characterisation is a triumph. Gina McKee’s Viv – the spitting image of a girl I knew at school – oozes confidence, intelligence and wry humour. Rose, as played by Anna Maxwell Martin, is a life force that holds the world together and such a joy to watch. Tamzin Outhwaite’s Di attacks life head on, with a tender – yet uncompromising – strength. Thinking back to the play, none of the performances makes sense by itself. They are bound together, a whole greater than the sum of its parts.

Plays have a way of coming together: I saw No Quarter and this production in the same week, and the two plays live parallel lives: they relish the noise and the unhinged energy and loud Eurythmics songs. Di and Viv and Rose get to see the shape of things to come. And they still won’t stop dancing.

Revstan has written her own review, with the benefit of having seen the first production in 2011.