From announcement it seemed great timing that Christopher Marlowe’s Edward II and Shakespeare’s Richard II were going to be performed so close together, at the National Theatre and Royal Shakespeare Company respectively. The stories of two kings forced to abdicate the throne on the way to a violent death, the similarities between the plays make comparing and contrasting tempting. Even more so now that I have seen the productions and they are both in my “I am so in love I want to talk about them all the time” list. In other words, any excuse will do.

Spoiler warning and context: I normally try to avoid spoilers but this is a different kind of post, with plenty of spoilers for the plays and the two aforementioned productions. If you so wish, you can read my (mostly) non  spoilery reviews for Richard II and Edward II. Also I am not a scholar and my understanding of the text comes almost exclusively from performance. My observations relate to these particular productions as seen through my eyes.

Edward and Richard: One would be hard pressed to describe either as good rulers (at least at the time we meet them), but similarities stop there. Edward, as played by John Heffernan, is the rebel barefoot king, defined by his need to love and be loved. It makes him vulnerable, often weak, but opens the soul and makes it easy to be on his side. Richard is far more elusive. His divine right to rule is his default understanding of himself, but at the same time there is an ever present – if well hidden – hollowness to his conviction. It’s the trojan horse that opens the door to his salvation. Richard is not easy to like, and in David Tennant’s performance he never quite surrenders that last scrap of regal entitlement, but there is hope in a man who looks at his downfall in the same uncompromising way he reigned supreme. END_OF_DOCUMENT_TOKEN_TO_BE_REPLACED 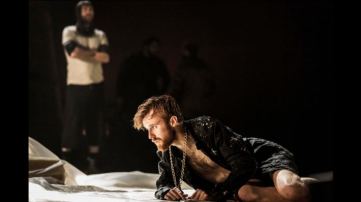 A play by a young playwright, a young director and a young cast. No, it’s not a National Youth Theatre production in collaboration with the National Theatre – although you should definitely check those out – but Christopher Marlowe’s Edward II performed at the Olivier stage. It’s a five hundred year old play but Marlowe died at 29, most of the actors in the company are in their late twenties and director Joe Hill-Gibbins is 36. The Olivier as a rowdy youth club? You bet, and so much more.

The play is the story of Edward II, King of England, who probably prefers the embrace of his lover Gaveston to ruling England, but rule he must. The power struggles around him involve his wife Isabella, her lover Mortimer, his underage son Edward, his sister Kent, the Barons and the Church. Needless to say it doesn’t end well.

The production spills with energy END_OF_DOCUMENT_TOKEN_TO_BE_REPLACED

Kyle Soller as Edmund in Long Day’s Journey Into Night

Last week, I went to see Long Day’s Journey Into Night at the Apollo theatre, a pitch perfect production of a fascinating play. I will post a review soon but Long Day’s Journey Into Night also interests me for its production history: the play features demanding roles for five actors of two different generations, and while established actors are cast in the older roles, the younger roles are taken by talented, often uknown actors, who often go on to become big stars.

In the 2012 West End production, Edmund, the younger son of the family, is played by Kyle Soller, who recently won the Evening Standard Theatre Award for Outstanding Newcomer for his performances in three 2011 productions: Glass Menagerie and The Government Inspector at the Young Vic and the Faith Machine at the Royal Court.

In the last 25 years, Edmund has been played by, among others, David Tennant in a 1994 production for Dundee Rep, Andrew Scott in a 1998 production for Gate theatre in Dublin and Stephen Dillane in a 1991 National Theatre production. END_OF_DOCUMENT_TOKEN_TO_BE_REPLACED