It’s a rare modern play that I remember so many of its past productions: Although aware of the glowing word of mouth I missed the first production in 2008 at the Royal Court and I regret it ever since. Among other things, I had to wait for Almeida’s The Rope several months later to discover Bertie Carvel for myself. And in a case of ex post facto typecasting (I always wanted to use latin in my writing), I always thought that Bertie Carvel played Philip, while in fact he was Oliver. 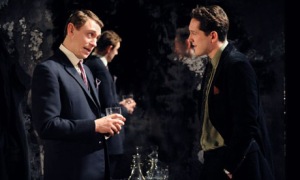 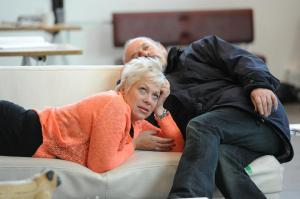 In recent weeks, I had the opportunity to see the earlier work of two playwrights who are now at the top of their game: Bruce Norris’ Purple Heart, written more than a decade ago, still plays at the Gate Theatre and Richard Bean’s Smack Family Robinson, written in 2003, just started its run at the Rose Theatre Kingston. Both playwrights have gone to receive much acclaim as well as win numerous awards and a look at their early plays is fascinating.

Smack Family Robinson (originally written in 2003 and set in Whitley Bay but updated to present time and Kingston for this production) tells the story of middle class suburbia but with a twist. Or is it twisted middle class suburbia? Either way, the Robinsons are typical in their strong community bonds, their family squabbles, their 60s-free-love values turning into consumerism. On the other hand, their source of income is, one hopes, unusual. The clue is in the title. Tensions between received wisdom and true morality, expectations and reality, are at the heart of the play. END_OF_DOCUMENT_TOKEN_TO_BE_REPLACED 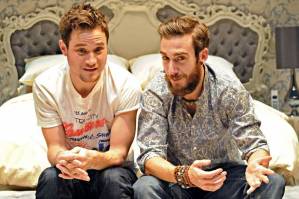 In the past week I saw two plays by two young writers, both plays dealing with same sex relationships, both writers using initials as their first name. But as they say, the similarities end here. DC Moore’s Straight, adapted from a film and produced by Sheffield Theatres in association with the Bush theatre, is at first glance modest in its ambition. Recounting the relationship between a young couple and the impact an old friend’s visit has in their lives, it focuses on small gestures, tiny details and the natural joyful interactions between people. By getting the details right, it reveals a world where people reach out for intimacy, meaning, tenderness and hope. In many ways, this is the biggest ambition of all.

The first, and probably most important, thing to be said about the play: it’s very funny. END_OF_DOCUMENT_TOKEN_TO_BE_REPLACED 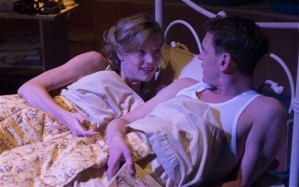 Maya Alexander and Andrew Sheridan in One Day When We Were Young. Photo: Elyse Marks

After a few weeks where my theatre consisted of Shakespeare, Ibsen, a revival of an eighties play and a Chekhov that didn’t look like Chekhov, it was great pleasure to go back to new writing. With a packed schedule and within twenty four hours, I saw four plays from four young playwrights (you are getting old when the playwrights start looking younger): first it was This House by James Graham at the National Theatre, and the next day, the Roundabout season, three plays in a single afternoon, produced by Paines Plough and Sheffield Theatres and performed at the Shoreditch Town Hall.

Three playwrights, all under 35, three different visions all performed in the same intimate, almost inescapable, space:

One Day When We Were Young by Nick Payne: My favourite piece of the day, especially the second act, tenderly performed by Andrew Sheridan and Maya Alexander. Nick Payne is currently riding an immense high, with Constellations at the Royal Court being a huge success (and transferring to the West End) and his play “If There Is I Haven’t Found It Yet” playing in New York. “One Day When We Were Young” is a story of an unlikely and brief love affair that marks two people in different ways for the next sixty years. Payne’s writing probes difficult places of loneliness and heartbreak, and the actors, especially Andrew Sheridan (who has the rare ability of drawing you in so effectively and with so little fanfare that takes you by surprise) make the play justice. END_OF_DOCUMENT_TOKEN_TO_BE_REPLACED