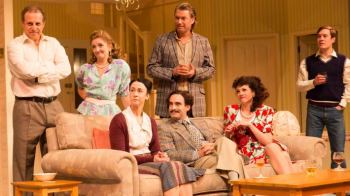 A Small Family Business doesn’t feel as one of Alan Ayckbourn’s best plays. It’s not so much it is dated, but a strong plot executed masterfully leaves little space for subtleties in characterisation. While some characters make a strong impression, others lack internal life. As a result, the play comes across as an enjoyable diversion but without the cutting despair we are used to in other Ayckbourn plays. The problem is compounded by the production being staged at the Olivier. The vast space makes the play appear more vague, less intimate than it would have been otherwise.

Having said that, there are many pleasures to be had. The banality of corruption and moral corrosion unfolds with masterful inevitability. (At a time when the papers are – once more – full of the MPs expenses scandal, the argument is hardly dated). END_OF_DOCUMENT_TOKEN_TO_BE_REPLACED 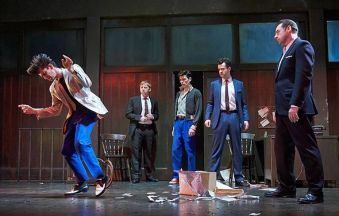 Last night was an important night in the calendar. It was the last performance of Mojo at the Harold Pinter theatre, and that would have been significant enough, but for me it was also the official end of theatrical 2013, a vintage year by all accounts. Others are articulate in analysing cutting edge trends, but what I loved about 2013 was the abundance of productions that generated feverish excitement. In the last few months of the year, London theatres were full of people bouncing from Richard II to Coriolanus, Americhan Psycho to Mojo, but also productions without major stars: The Light Princess at the National, or The Pride at Trafalgar studios. Earlier in the year, Edward II (again at the National), Macbeth at Trafalgar and the Cripple of Inishmaan at Noel Coward had similar audiences.

Not all productions had been sold out successes and some of the enthusiasm was instigated and channelled through the presence of a famous actor, but what I loved was the absence of austere and po-faced reactions. Some people took these productions to their (fannish) heart and tumblr exploded with the sublime and the ridiculous. END_OF_DOCUMENT_TOKEN_TO_BE_REPLACED

Before seeing the new Royal Shakespeare production of Richard II, I wasn’t sure I should review it. I made no secret of the fact I was excited about it but the dark side of anticipation is it builds fortresses between what you want something to be and what it is. Could I be open enough and would the production be strong enough to guide me away from misguided preconceptions? I shouldn’t have worried. In the hands of Greg Doran and his talented cast, the story of a king’s fall from grace takes flight in interesting directions, opens doors I hadn’t seen opened before and more importantly it’s a dramatically thrilling ride. 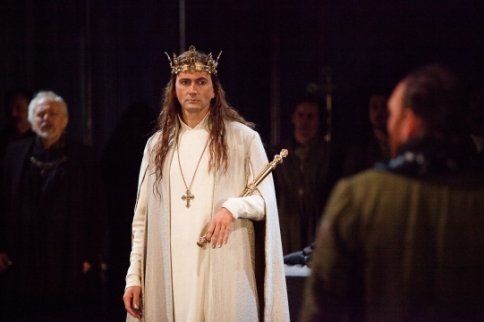 David Tennant’s Richard is not merely a king among men, he is truly the God’s representative on earth and his actions and understanding of himself come from that. For us as a modern audience, it’s an unpalatable notion and Tennant’s Richard is an unpalatable character. He has no moral considerations or understanding of limitations. When he starts to lose support, it’s the start of a transformation process on a molecular level: END_OF_DOCUMENT_TOKEN_TO_BE_REPLACED 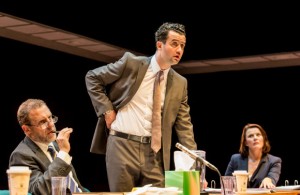 Nick Payne’s Constellations was one of last year’s theatrical highlights: elegant and simple, it took life’s small gestures and launched them into space. It transferred from the 80 seater Royal Court Upstairs to the West End and was nominated for an Olivier award. As his new play starts performances, does he feel the pressure of repeating the success of Constellations?

On the evidence of The Same Deep Water As Me, directed by John Crowley at the Donmar Warehouse, Nick Payne doesn’t seem under pressure at all. On the face of it, it’s a simple story with a simple structure unfolding over several years: its milieu is a solicitor’s firm specialising in personal injury claims. It’s not the kind of profession to brag about and the two solicitors working on the firm bear (and occasionally justify) its unsavoury reputation with a mixture of self delusion and decency.

As with Constellations, dialogue and relationships are impeccable.  END_OF_DOCUMENT_TOKEN_TO_BE_REPLACED