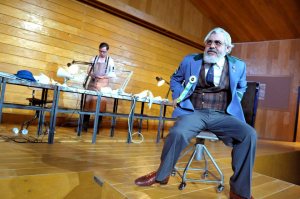 Niall Ashdown as Aslaksen and Darrell D’Silva as the Mayor. Photo Keith Pattison

More than a century after its first performance, Henrik Ibsen’s Public Enemy (or An Enemy of the People as it’s better known) remains a play so relevant it’s tempting to think it has been updated for 21st century sensibilities: a scientist discovers that the town spa – the lifeline of the local economy – is polluted. Financial interests, corruption, betrayal and hypocrisy combine for an explosive mix of public and private tragedy. The human nature at its more complex, the attraction of the play is obvious.

For the longest time into the Young Vic production of Ibsen’s play (directed by Richard Jones in a new version by David Harrower), I was unconvinced by its approach. END_OF_DOCUMENT_TOKEN_TO_BE_REPLACED