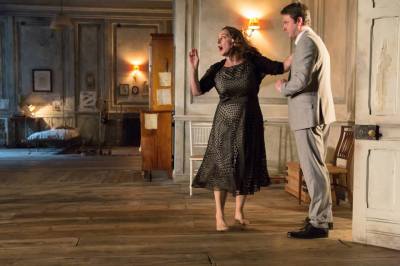 You wait ages for one Chekhov and two arrive in less than a week. I was disappointed by Uncle Vanya at St James Theatre, which made the anticipation of The Cherry Orchard a tense affair: I don’t like not liking Chekhov. It’s almost hurtful. It doesn’t make sense. The meaning of life comes into question. Fortunately, the Young Vic Cherry Orchard – spiky, unsentimental, insolent, respectful only of a ridiculous tender heart – comes to restore the world as it should be.

The production, directed by Katie Mitchell in a new version by Simon Stephens, crackles with elegant and thrilling contradictions: outwardly it looks traditional, with its straight-laced proscenium arch and naturalistic approach. Yet it creates a feeling of uneasiness, a punky wave of a new world. The modern setting (invoked mostly due to costumes) is established with huge confidence: suits and ties don’t demand the presence of smartphones and Ipads, letters are still sent and news (good news, bad news, terrible news) is still being delivered by messenger. The characters break out into behaviours Chekhov would have never dreamed of which only highlights their inability to break free: their behaviour is often unhinged but that gives them no insight or self-awareness. It’s an act of decompression, like a balloon losing air and spinning out of control, only to end up on the floor, shriveled and defeated.