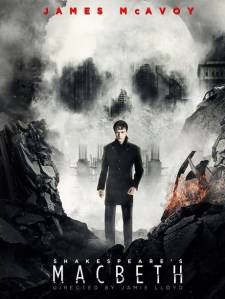 Should I start at the beginning or the end? The very good or the not so good? Any way you look at it, Jamie Lloyd’s production of Macbeth at the Trafalgar studios (or Trafalgar Transformed as it’s being rebranded) is a play of two halves: until the interval, I was happy to declare it one of the best productions in recent memory. After the interval, it lost momentum and struggled to regain focus.

Some problems in the second half are due to long absences of the protagonist: his name is above the title and his performance shows he deserves it.  James McAvoy accommodates the soldier, the husband, the friend and the killer with surprising ease. The words dance out of his mouth fresh and unexpected. His Macbeth is clear eyed about moral consequences though unapologetic about his choices. Apparitions, ghosts and bloody daggers hang around him as much as in him. He fights them as much as he welcomes them. It’s a fearless commanding performance of light and shade, and it fuels the production. END_OF_DOCUMENT_TOKEN_TO_BE_REPLACED