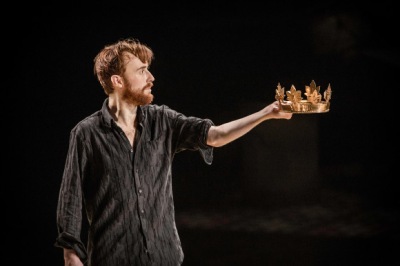 I always had a soft spot for John Heffernan. Besides the obvious (talent to knock your socks off, to be anything at any time, anywhere), he is also someone I caught from the start. In thirty years, when he is revered as a theatre great, I will be discreetly smug, having noticed early on (and having missed nothing ever since). When earlier in the week Jamie Lloyd said he wants to direct John Heffernan in Hamlet, my reaction was one of undignified excitement – while recognising the inevitability of it all. Of course, he will play Hamlet. The only question is when, where and with whom.

To that end, I decided to give Jamie Lloyd a helping hand and cast the rest of the production:

Claudius: I always wanted Claudius to be young, considerably younger than Hamlet’s father and only a few years older than the prince. Uncle and nephew grew up together, playmates, confidants and best friends. But close to adulthood, they took separate paths and Claudius started to be resentful in the knowledge he ‘d never be king, even though he is temperamentally suited to it more than the young prince. My first thought was to cast Tom Hiddleston, but in the end I decided he is too young and Michael Fassbender should get the part.

Gertrude: Despite her position, the queen is unwilling to do what is expected of her and surrender all her desires. Tilda Swinton is the rebel in any role. Not to mention unfathomably sexy. (If we can’t have Tilda Swinton, we should get Cate Blanchett).

The Ghost: Paul Rhys – both tender and a little bit frightening – doesn’t look like he could be John Heffernan’s father, but Hamlet was never his father’s son. There is much love between them, but also distrust as they don’t understand each other. END_OF_DOCUMENT_TOKEN_TO_BE_REPLACED

We are only a few weeks away from the first performances of Simon Stephens’ Birdland at the Royal Court. So much excitement riding on this: Andrew Scott in a Simon Stephens play (Sea Wall anyone?) directed by Carrie Cracknell. No pressure but anything less than superlative might be a disappointment.

This is not Andrew Scott’s first theatrical appearance since he played Moriarty (there is no way around it, for certain actors in certain roles there is before and after). He always stuck very close to the stage, all the way back to his native Ireland and Abbey theatre. My first introduction to his talents was at a Royal Court rehearsed reading in early 2009. (I had to look it up but the play was The Uncertainty Of The Situation (Die Unsicherheit der Sachlage) by Philipp Loehle. The cast – take a deep breath – included Katherine Parkinson, Jeff Rawle, Paul Ready, Samuel West). Once I saw him on stage, I always kept tabs, I wanted to have that rush again.

But this was seven years after he played Angel in Peter Gill’s Original Sin, after Frank Wedekind’s Lulu. The production premiered in Sheffield Crucible with mixed reviews but I can’t help to feel bawled over by its subject matter: “Angel, a spell-bindingly beautiful boy is plucked from the streets to be the plaything of a wealthy newspaper proprietor. END_OF_DOCUMENT_TOKEN_TO_BE_REPLACED 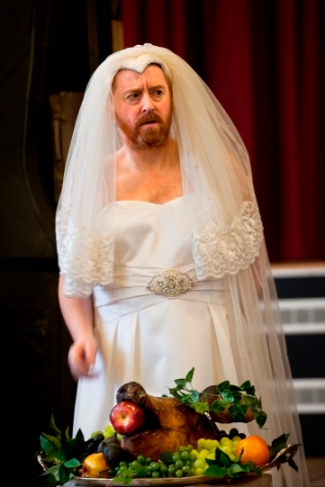 Forbes Masson as Katherine in The Taming of the Shrew. Photo Simon Annand

There has been media discussion lately about cross gender casting, mainly because high profile actresses talked about their desire to play male roles. This is surprising to me. The fact this kind of statement generates headlines that is, not the desire itself. Why would you be an actor and not want to play everything? And equally, why is suspension of disbelief perceived as problematic when it involves gender?

So I decided to think through some of the joys and challenges of cross gender casting. I did almost no research, so feel free to dispute any of my statements and I am sure everyone’s examples will be richer than mine.

1) Some of the discussion is tied with gender inequality and the small number of female roles in classical theatre. While this is true (and inequality isn’t always addressed in modern theatre either), is that poor justification for what is an artistic decision? Truth is, cross gender casting is far more exciting than that and can jolt the imagination in interesting directions, including – but not limited to – plays where gender politics have a central role. The recent The Taming of the Shrew at the Royal Shakespeare Company – with men playing women and women playing men – and The Shed’s Blurred Lines – with its all female cast playing all roles – are good examples. END_OF_DOCUMENT_TOKEN_TO_BE_REPLACED