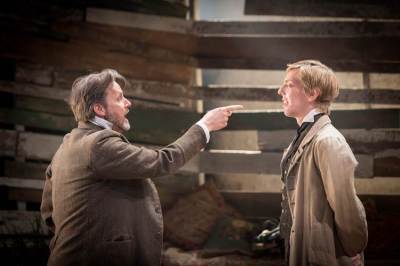 In a cunning piece of programming, the Donmar follows James Graham’s Privacy – the most un-Donmar of productions – with Brian Friel’s Fathers and Sons (adapted from the novel of Ivan Turgenev). If Privacy was brilliant in unexpected ways, Fathers and Sons has the emotional richness and acute lyricism that characterise Donmar productions at their best. Let’s be clear: if the Lyndsey Turner directed production doesn’t rewrite the theatrical book, that’s not a criticism in any way.

The story is set in mid 19th century Russia with two young men, Arkady and Bazarov, returning home for the summer. University has opened their eyes to a whole new world and they buzz with the enormity of it all. Back home, they are faced with rich if neglected estates, middle-class ideas, lives preoccupied with the soil, and harvest, and sex. The purity of their idealism is put to the test as the social landscape changes rapidly and irrevocably. The conflict between young and old has the inevitability of a clock ticking but none of the clichés. Don’t assume you know how interactions will play out: Arkady’s father dots on his new baby born out of wedlock. Bazarov’s father idolises his son.

There is a bittersweet, even droll, breeze blowing in the play. These are not people aware of tragedy and impeding doom. In fact, tragedy comes in the shape of delicate human interactions: regrets, human hurt, a word said or not said. Brian Friel’s translation places the big moments inside the small ones and the present (our present) inside the past.

Joshua James continues to mark himself as a young actor to watch. His Arkady is a rich kid with a loyal heart and an open mind, whose optimism stumbles on harsh realities. James is intensely moving but doesn’t let Arkady off the hook at the character’s more ridiculous moments. That’s James particular talent: emotionally powerful but comically absurd when he needs to. Seth Numrich’s Bazarov has a cool exterior but more doubts that he would like to admit, and Numrich is adept at playing doubt and confidence often in the same breath.

Tim McMullan’s face is full of geometrical shapes: the perfect triangles of his eyes, the zig zag line of his mustache. It’s all a misdirection: His Pavel could have been the comic relief, and McMullan’s face suggests something of a clown (if a sad one). But the comic aspects of the character are undercut with affecting quiet dignity. Anthony Calf’s Nikolai is surprising in his own right: in many ways a bourgeois relic through and through, he also knows to follow his heart and win his moment in the sun with a generous tender spirit. Elaine Cassidy’s Anne is a woman whose quiet temperament hides a profound knowledge of the world. Complex characters and multidimensional performances give the production its power.

The set, designed by Rob Howell, is dominated by wood peeling in the sun, and beautiful diagonal lines that draw the eye and create the illusion of big space. Some elements of the set draw closed as scenes change and that creates a dynamic sense of tension: summer and russian countryside can – and will – contract for the winter to come.

Richly observed and superbly acted, this is one of the passionately tender productions of the year.

Workshop: On 5/7, I attended a Donnar workshop about the production. The Donmar education department runs practical workshops open to the public and as far as I know, this is the only theatre that runs workshops open to anyone: not students, or actors, or schools but anyone who can pay a tenner and is free on a Saturday morning. I won’t go to much detail but it was brilliant fun: while the initiative is aimed at people with no acting experience (and certainly that was true for our group), it’s a hands-on session of exploring how the company worked together towards the production. It’s practical, it’s a little bit ouf of most people’s comfort zone and it’s an opportunity to see the production from a different angle. If you go to the theatre a lot (as I do), you inevitably start to wonder about the rehearsal process and this is a brilliant opportunity to get a taster first hand. And my Nikolai was a thing of beauty, I ‘ll have you know. You can find more about the workshops at the Donmar website.