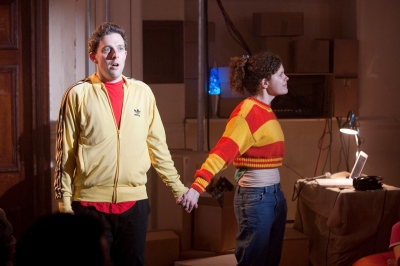 What do young people think when they see the initials TDK? A disease maybe? A bank? For a generation who reached adulthood in the eighties and nineties, TDK was the gate-keeper of teenage dreams. Analogue mixed tapes with the power to send you to heaven or crash you to hell. It wasn’t about the perfect song, it was about the perfect compilation and segueway, when sophistication lived or died from one three-minute pop song to the next.

TOOT’s new production Be Here Now captures the rawness of this energy: teenagers confiding in bedroom posters, obsessing over three-chord songs and fumbling over kisses and first loves. Everyone has a corner to fight, a corner utterly insignificant in itself but invested with so much meaning that is life transforming. The production is most interesting when it undermines the sweetness of memories with the imperfection of life. The meeting of eyes across a party has the sparkliness of dry ice and snow fall but the line between fantasy and reality plays nasty tricks on heartbroken souls.

It all happens in an environment that itself is like a mixed tape: jump cuts, forwards and rewinds. Not all segueways are smooth but some of the unpolished rawness adds to the thrill. And yes, the audience participates and you should be prepared to get up and tap your feet. What are you afraid of? You did it when you were fifteen, gangly and awkward, with all the world watching, at least in your head.

Terry O’Donovan, Stuart Barter and Clare Dunn are the trio of writers / performers behind TOOT and each of them brings a different if complimentary energy to the party. Terry O’Donovan has a wide-eyed openness, the boy we think will get hurt in life but whose steely positivity reaps more rewards than we imagine. Stuart Barter has a cooler darker vibe that starts to unravel and hurt as life progresses. Clare Dunn is the smart, interesting girl, intensely self-aware who wants to surrender without giving in. All three actors are immensely watchable, a quality never to be underappreciated, and their organic relationship with the material is a vital ingredient to the success of the show.

Be Here Now is a lovely memory of a production, the way we were and all the ways we still are.

It is at Shoreditch Town Hall until June 28th and tours from September.