Parental guidance: I don’t intend to take a measured approach with this post. Be warned of breathless and shameless enthusiasm. I am told it’s called squee. I wouldn’t know. 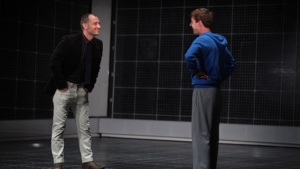 Jude Law and Christopher (Luke Treadaway) on stage at A Curious Night at the Theatre. Photo Ellie Kurttz

When a show overruns by 75 minutes, it finishes at close to three hours without interval and no one complains, you know it’s a rare experience. A Curious Night at the Theatre was always destined to be, well, curious: part theatre, part live concert, part charity event, it could all have gone very wrong. In the end, it delivered on all counts: A funny play, party atmosphere, surprises, confetti and £100,000 raised. The curious night was something of a special night.

First things first, it’s theatre after all and there is a new play by Mark Haddon and Simon Stephens: a detective story for Christopher, where he is contacted by the Doctor and entrusted with an important mission: Moriarty – who, as the Doctor admits, looks suspiciously like Andrew Scott – has developed a computer virus and all people coming in contact with it will lose the ability to understand metaphors. “You, and only you Christopher, can rescue the metaphor.” Christopher is hesitant: “Why me?”. “No, no, no” says the Doctor, “the virus started working already”. Christopher doesn’t trust metaphors, which are lies after all, but is convinced to help. The Doctor calls the Queen and, amid some giggling and old fashioned flirting, gets Christopher an invitation to the Buckingham palace. The Queen has, after all, the best contacts. 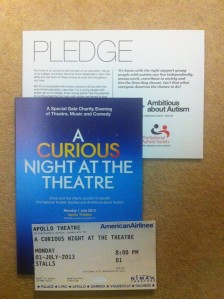 Christopher meets the Queen, who, from certain angles looks like Helen Mirren (but then many people don’t remember what the real Queen looks like, and they think she looks like a famous actress) but truth be told, is more impressed with the corgis. He knows many things about them, but the Queen can match him, and she also knows what a metaphor is, because she is a metaphor herself. Quickly and efficiently, she gives him the MI6 contacts he needs.

Christopher returns to school where he does his lovely space weightless walkabout (Frantic Assembly, take a bow). Jude is envious and wants to have a go. “Have a go?!!” everyone is appalled. He points out how unfair it all is, not only can Christopher walk on air, but his thoughts are voiced by the gorgeous Niamh Cusack (you just had to be there, alright?). After much objecting and interjecting, Jude Law is lifted, tumbled in the air, carried and passed around. And he falls in love with Siobhan.

(to be continued, with Christopher meeting Q – who looks suspiciously like Freddie from The Hour, and confronting Moriarty. Chris Martin and Jude Law goad each other into donating £10,000 each and a handwritten note from Luke Treadaway goes missing).

Part Two of the story can be found here.

The performance, that took place at the Apollo theatre on July 1st 2013, was in aid of the National Autistic Society and Ambitious about Autism. Give generously.