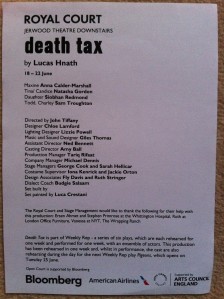 Lucas Hnath’s Death Tax, the second play at Royal Court weekly rep season, starts at the same box of a set The President Has Come to See You occupied, but the similarities end here. While “The President…” was a seat of the pants experience, certainly for the actors, Death Tax is a thoughtful, funny, exposing play about life close to death and life without death. The characters are defined by questions of mortality, money, the moment when their response to a moral and practical challenge changes their life, whether they realise it or not.

The story also makes an interesting leap into the future and imagines a world where immortality is merely a question of funds. Plays rarely step into science fiction territory and, while Death Tax is moderate in its futuristic ambitions, it is still an adventure with a genre theatre rarely touches. More science fiction plays please.

All performances are involving and incisive: Sam Troughton, in two distinct roles, embodies both the moral fallout of desperation and the slow soul destroying effect of pragmatism. Anna Calder-Marshall as Maxine, with her single minded devotion to life at all costs, is creepily funny and a force of nature (if nature was a respirator and a life support machine). Natasha Gordon’s performance,  beguilingly winning, turns challenging when moral ambiguity seeps into the character. Siobhan Redmond expertly toys with the audience’s preconceptions to reveal a complex truth.

My only objection is to the brief introductions before every scene: they betrayed lack of confidence, completely unjustified  by the rest of the play. Maybe it’s the nature of these pared down productions to want to help the audience along, but it wasn’t necessary.

Last but not least, I haven’t seen a production directed by John Tiffany since Black Watch and it’s a cause for celebration he is working back in London (temporarily resisting the delights of America and Dundee). Hopefully the Royal Court will soon tempt him with a fully fledged production (or Let The Right One In will travel south).

Death Tax came after The President Has Come To See You and before Pigeons in the Royal Court Weekly Rep season.