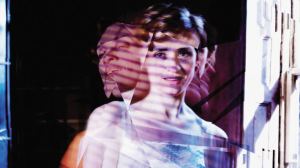 As luck has it, in the last week I saw two of the longest productions I am likely to see all year: Lucy kirkwood’s Chimerica at the Almeida – at a hefty 3 hours 10 minutes – followed a few days later by Eugene O’Neill’s Strange Interlude at the National Theatre – at an even more impressive 3 hours 30 minutes. As a regular theatregoer my dirty little secret is long running times make my heart sink. I don’t exactly feel negative towards long shows, but I want them to justify my investment for the better part of four hours. While Chimerica’s ambitious world won my affections, Strange Interlude, despite many fine moments and stellar performances, struggles under a text that goes from compelling to flabby in a heartbeat.

The premise is ambitious and the approach nothing but mundane: the play follows Nina from the aftermath of the World War One (where she lost the love of her life) to the late 40s. Characters often break the fourth wall and address the audience directly: mid-sentence, mid-thought, mid-breath. Even a perfunctory research on the play shows it’s often performed at five hours and has won the Pulitzer prize. Even at its reduced length, the word uneven describes it best for me.

The soliloquy technique works only partially: at the best of times, it produces a trilling staccato effect of thoughts as a an alternate, even traitorous, reality to words. At other times, it seemed banal and unnecessary. Some of the dialogue suffers the same fate: precise and revelatory one moment, overblown the next.

It’s not the production’s fault. As directed by Simon Godwin, the pace is confident and engaging and the play seems to breath at the right places. Soutra Gilmour’s design starts as a revolve of three houses only to open up to an luscious modern house at the second half and an impressive “wow” moment later on (I won’t spoil it for you).

Similarly the central performances have an engaging – and unrelenting – momentum. Anne Marie Duff (forever Saint Joan in my heart) brings her customary gravitas, lightness and warmth to a character that’s often a cypher, definitely ambiguous. Charles Edwards is compelling and a strong presence in a role defined by the character’s inability to step forward, make his mark. Jason Watkins somewhat steals the show as someone who turns cluelessness to a virtue.

In the end the play stands out for some bold statements about morality. If happiness is a virtue, many of our moral choices have a warped sinful quality. Is that why we feel guilty much of the time?

For another opinion, you can read revstan’s review.