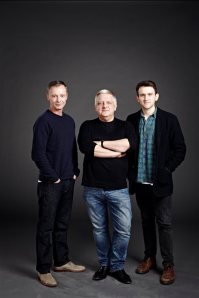 When the cast was announced for Harold Pinter’s The Hothouse at the Trafalgar Studios, my immediate reaction was delighted disbelief: the headline (and the poster) can only accommodate two stars, but make no mistake, any of the five principal actors would get top billing in another production. They just happen to be on the same ensemble piece, and the challenge for director Jamie Lloyd (who must have worked true magic to assemble such a cast) was not to squander their talent. On this evidence, there was nothing to fear.

Pinter’s play as directed by Lloyd is a comedy with such hellish vibe that could easily be one’s worst nightmare. On Christmas day five characters rattle around a mental institution, dark secrets, hidden motives and increasingly disturbed behaviour oozing through their pores like sweat. These are merely the staff. In fact we never see any of the patients who, when referenced, seem balanced and compassionate. The staff, it’s a different story. This is a furnace of a production: not only due to the reference of the title but also because of the hermetically sealed environment. These characters live inside the pressure cooker, long string of words (that shouldn’t make sense but they do in a disturbingly funny way) delivered with the violence of steam escaping. No one sees in, they can’t see out. It’s chilling, scary, funny and chilling again. On a loop.

The cast balance each other perfectly and create an unusual relay: when you think you saw one scene stealing performance, another comes along to match it. Simon Russell Beale’s Roote is a morally bankrupt man having a mental breakdown and desperately trying to affect control. Through a torrent of words and actions, it’s the quieter looks that betray the abyss he has fallen into. John Simm’s Gibbs, the man who talks the least and understands the most, has a perfectly curved grin, as disarming as it is revolting. In rare moments, he lets the mask slip and he can suggest sinister depths with only a flicker.

John Heffernan’s Lush, impeccably mannered but emotionally feral, can’t resist provocation and insincere flattery in equal measures. A sycophant by vocation and not by design, his eyes light up at the smell of desperation and fear. Heffernan combines a rare degree of physical athleticism and verbal prowess and his scene with Simon Russell Beale, head-to-head and glass-to-glass, is sublime.

Indira Varma’s Miss Cutts, a woman in a man’s world, throws herself onto the men with the single minded focus of an addict and a disturbing lack of self-respect. She is no feminist icon, but then all of them are the worse of their species.

The only exception is Harry Melling’s Lamb, a naive though annoying young man, whose anxiety blinds him to the pit of snakes he walks into. The first half of the story is Melling’s show. In one of the play’s many long speeches (speeches that feel like volcano eruptions rather than words), his hands work up a performance of monumental frenzy. In another scene, his splits tragedy and comedy by a nano second.

The set has the yellow sickening feel of purgatory, and the half hearted attempts to make the place hospitable (the couch in the staff room, a cabinet of drinks in Roote’s office) only serve to highlight its hellish nature. The excellent sound scape punctuates the story with intrusive and otherworldly sounds that seep into the characters’ souls.

After an impressive Macbeth, Jamie LLoyd has put together a disturbingly funny and viscerally exciting Pinter. His season of plays at the Trafalgar studios is shaping into a triumph.

For a second opinion, you can read revstan’s review.