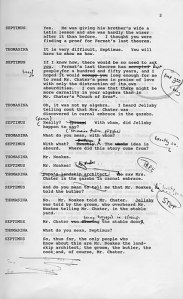 Tom Stoppard’s Arcadia premiered at the National Theatre on April 13th 1993, 20 years ago. I am not inclined to remember these things, but recently I came across an old interview with Simon Russell Beale that got me thinking about that moment in time: Mr Beale was preparing for Richard III and wouldn’t do Hamlet for several years yet, Arcadia – the best play of all time – was just coming out to the world  and I hadn’t the faintest idea I would eventually move to London and spent almost all my adult life in England.

I was still in Greece back then, flashed with young excitement of discovering things, and my most precious – and incomprehensible – obsession was Tom Stoppard. I had seen Rosencrantz and Guildenstern Are Dead*, the perfect text to discover when you are young, and I was spending many hours in the British Council library trying to read books beyond my command of the english language. I clearly remember the issue of Theatre Record with the reviews of Arcadia (this is a world without internet, and it’s hard to believe such a moment in time existed). I remember the reviews saying something about maths, and I really couldn’t understand how a play – any play – can be about maths. When I eventually saw the 2009 production at the Duke of York’s, everything was perfectly, gloriously clear. “We shed as we pick up, like travellers who must carry everything in their arms, and what we let fall will be picked up by those behind. The procession is very long and life is very short. We die on the march. But there is nothing outside the march so nothing can be lost to it.”

But the story doesn’t finish here: In 1998, visiting London, I asked my friend to get us tickets for the double bill of The Black Comedy / The Real Inspector Hound on the basis it was the only Tom Stoppard play in town. I doubt I understood much (my english was still ropey), but years later I discovered that David Tennant was in that production (I might or might not remember someone tall and gangly tumbling down a set of stairs). 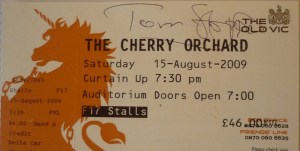 And for a last trip down memory lane: a couple of years ago, another friend pushed me in front of Sir Tom Stoppard and I got his autograph. Despite having see him many times in person – he is always in the audience of one play or another – I would have never done it without “encouragement”. This is one of only two autographs that I have.

* Edward Petherbridge, the original Guildenstern in the Rosencrantz and Guildenstern Are Dead, is currently performing My Perfect Mind (a play he co-wrote) at the Young Vic. The word of mouth is nothing less than ecstatic.

P.S. The manuscript photo is from the Harry Ransom Centre website, a wonderful source with breathtaking photographic material.