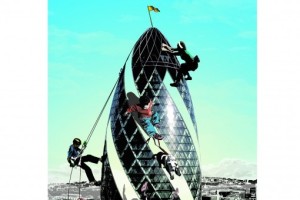 “Everybody’s got an agenda”, says one of the characters towards the end of Anders Lustgarten’s new play “If You Don’t Let Us Dream, We Won’t Let You Sleep”. It’s impossible to see the play, remember the line and resist the temptation to mention it in the review. Because Anders Lustgarten clearly has an agenda. Which is to say he has an opinion and a conviction. All fine ingredients for a play. The question remains: Do drama, insight, even provocation, match his conviction? Let’s see.

MAJOR SPOILERS. I won’t be able to make my case without plot spoilers, you have been warned.

The play starts when a government official comes across a great idea: if we monetise social unity and sell it as bonds, the private sector will pick up the cost and create incentives to reduce social unrest. Cue in scenes where bureaucracy and stupidity go hand in hand, money talks, people become numbers on a form. Early on, the play, with short jump cuts and scenes not necessarily related to each other, is reminiscent of Caryl Churchill’s Love and Information, but without the grace and piercing intellect.

Slowly, some characters establish themselves as the same person from scene to scene: Ryan, played by Daniel Kendrick, is a young working class man with prospects but things don’t go as planned. Joan, played by Susan Brown, is a retired nurse struggling to keep her dignity and make ends meet. Around them, bankers, hospital officials, hedge fund managers, immigrants, activists,  make points, speeches, try to advance their agenda. None of the characters is more than a placeholder for an idea: even Joan and Ryan, the characters we spend more time with, seem adrift without a convincing past.

What’s more, they behave in a way impossible to explain: Ryan, the nice young lad with prospects and ambitions, is involved in a serious physical attack with racial motives, just because his friend, an appalling individual whose racist ideas are 40 years out of date, tells him “Nobody in this worlds gives a flying f*** about you”.   Joan, a retired nurse, uses racial verbal abuse towards a stab victim because he is getting treatment – bleeding to death and all – and she isn’t (her bandage for a “laceration with subcutaneous hematoma” isn’t set right). If those were signs of human weakness, the play could make an important point: no one is immune to being selfish. As it is, the system is to blame. The characters never take responsibility and face the monster within.

The last part of the play is set in a disused courtroom: activists are ready to put capitalism on trial. They want to do it right, argue all the points, create the moment where everything changes. Dramatically, it is meant to be a time of great jeopardy: if it doesn’t happen here, it will never happen. Instead, it looks futile and inefficient: people sitting around and quoting essays. Someone is excited about all the media interest: “Al-Jazeera, the Guardian and the Mail, together at last.” I am certain, when the revolution starts. the Guardian and the Mail won’t be there.

The play sets great ideas but doesn’t follow through: the social unity bonds are issued, capitalists bet pro and against, we are promised this game changing idea will be taken to its ultimate conclusion but nothing happens. Great characters pop up, but don’t get to say anything insightful: Kelly, played by Meera Syal, an activist of more than thirty years, offers banalities like: “You keep plugging away and never give up”. There is no sense of personal history or experience. Sly jokes about the user comments at the Guardian website and Starbucks spice things up, but by and large, the play remains blind to the ironies of the  situation.

Within the serious constraints of the play, the actors make a good job of portraying a wide variety of characters, changing at the blink of an eye. I was particularly impressed with Ferdy Roberts who portrays three people as far away from each other as they can be. Simon Godwin keeps things moving and without masking the play’s weaknesses (it’s never as interesting or as radical as it wants to be), the result is an engaging evening.

“If you don’t let us dream, we won’t let you sleep” was a line chanted by the protesters in Spain. It seems to me he biggest victory of capitalism is to sells us dreams. Maybe it’s time for everyone to wake up.