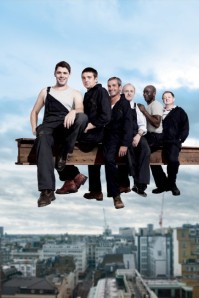 How do you review a play like The Full Monty? Does it live in the shadow of the much loved film? Does it deliver against fond memories as well as a stand alone piece of theatre? Fortunately, the Sheffield Theatres production, as directed by Daniel Evans, doesn’t present such dilemmas: you will be swept away whether you have seen the film or not.

The production starts with a bang. Almost literally. First scene at the disused factory employs a number of pyrotechnics, and while they don’t set the tone for the rest of the production, they make a statement: films might have the advantage of vast vistas and quick succession of scenes, but it’s hard to match the excitement of slightly dangerous risque things happening live (including the full monty).

Simon Beaufoy, writing the play from his own script, sticks closely to the story he invented for the film. He knows to keep the best lines and best set ups (the scene at the dole queue is every bit as breathtaking and iconic) but he has more room to expand on some themes. The political references are numerous and specific.  The sexual innuendo is, if not more explicit, definitely more playful. Some storylines don’t have a tidy resolution. The class war appears more sophisticated: the factory workers take pride and identify with their work clearly. Early on, there is a sly joke about class structure within the factory. The loss of identity and self worth is more specific.

Kenny Doughty as Gaz has plenty of happy-go-lucky charm, more so than Robert Carlyle, as a result certain realisations have more impact. Gaz starts from a largely happy place, and the need to grow up rings true. The interactions with his son (played beautifully, in the performance I saw, by Travis Caddy) have tenderness, tension and plenty of emotional jeopardy. Roger Morlidge as Dave carries much of the emotional life of the production. Dave’s loss of identity is palpable. Craig Gagey as Lomper, lost and angry in equal measures, hides it all  underneath a goofy exterior. Kieran O’ Brien’s uncomplicated cocky charm (pun intended) is a nice reminder of more hopeful times. Gerald, as played by Simon Rouse, suffers a double identity loss: not only does he lose his job, but clearly identified as a conservative, he is betrayed by his own party. Rouse beautifully plays rage mixed with dignity and occasional resignation.

Without a doubt, the disused factory stands for another character: everything happens in its shadow, literally and figuratively. It forms the backbone of an evocative set, and all changes happen to the foreground. You can move from the pub to the street to the Tory club, but this is Sheffield in the 80s and it’s a factory town (even without the factory).

The final number, which has to meet so many expectations, pays off beautifully: it’s such a joy to see the choreography play out to perfection, with joy, cheekiness and humanity. As for the full frontal nudity, I am not giving anything away, you will have to discover it for yourself.

I have come to expect great things from Daniel Evans as a director, and he didn’t disappoint. He has a knack of releasing humanity, excitement, warmth and playfulness, and they are all present in this production.

Only real disappointment was the audience: I wanted to see the play in Sheffield, its natural place in the world. Instead, on a Thursday matinee, some people thought they were actually in a Chippendales show.

P.S. My references to the film are from memory. Therefore it’s possible I misremember or completely forgotten certain things.

3 responses to “Review: The Full Monty, a play by Simon Beaufoy at the Lyceum (a Sheffield Theatres production)”